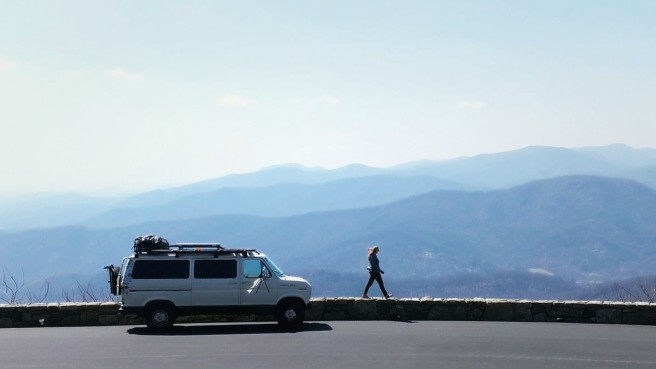 The Blue Ridge Parkway is a magical drive.  Gradient blue mountains in the distance around each bend are breathtaking.  We were a bit early in the season, so things weren’t as lush green as we would have hoped, but that also meant less people (which our slow moving vehicle enjoyed).

The Linville Gorge in Pisgah National Forest was our destination.  It is known as “the Grand Canyon of the East,” but, getting there required navigating over some very pothole-ridden gravel National Forest service roads.  MichelVangelo did a lot of bouncing around while Jason had a few choice words…  but it was worth it for the incredible views!  Western North Carolina with it’s rugged forest views made the Babel Tower hike a beautiful one.  A mile and a half down gets you to a stone spire you can scramble up for more views (just remember you have to hike UP 1.5 miles).

From the “Grand Canyon of the East” we drove to Stone Mountain State Park.  A 600 foot granite dome is the feature of this park.  It felt like we were back in Yosemite as we were hiking across the smooth grey stone.  We think they should market this park as the “Yosemite of the East,” it was seriously incredible (and less crowds).  Although, before they do that, I think the park needs to add a hot water heater, a cold shower made for an unhappy camper.

From North Carolina we hit a new state, Virginia!  We spent a few days exploring George Washington National Forest.  With PB&Js in our bellies we trekked up Elliott Knob an 8.3 mile round trip with 2,400+ feet of elevation.  It was a beautiful hike through the woods until the last mile, which turned out to be a steep, grueling walk on a gravel road with views of power lines.  An abandoned fire tower awaits you at the top to provide 360° Virginia views.  Our next stop, Front Royal, VA to see an old friend of Jason’s.

In college, Jason went to Costa Rica for a study abroad program for a week over winter break and during that time, he met Chris, a student from George Mason University.  Through the power of social media, they stayed in touch and we were able to meet up and explore Virginia for a few days with Chris and his friends.

This was my first time meeting him and Jason hasn’t seen him in over 10 years.  His animated laugh, infections smile, and embrace made me feel as if I’ve known him my entire life.  Chris’ girlfriend, Natasha, graciously took these strangers to Dirt Farm Brewing for stellar beers and unparalleled views of Virginia countryside.  His friends, Damien and Jesse, hosted us in their cabin; a perfect slice of heaven nestled right along a river.

One too many drinks with new friends the night before, we made our way to Shenandoah National Park.  Skyline Drive is a 105 mile road that runs the length of the park.  It was about halfway on this road (with a max speed of 35 mph) where we stopped for a break and Jason realized he only had one sandal.  This is a point of contention between us, as Jason continues to store his shoes in the side of his door and coincidentally, keeps losing them (my shoes are stored securely in the back of the van).

We had stopped at the visitors center earlier when we got into the park, so Jason decided to drive BACK to look for his sandal.  The sandal wasn’t found, but a text from Damien with a photo of a sandal confirmed Jason did in fact lose it, just not in Shenandoah.  I have no sympathy and I just wanted to get to camp, which we finally did…after a two hour detour.

Our short time in Shenandoah was spent battling the fog, colder temps and rain.  Even so, we still managed to get out on the trails and enjoy those blue ridge mountain views.  White Oak Canyon hike has many beautiful water falls along the way to hike down to and… many steps to hike back up from them.  For sunset, we hiked to Bearfence Mountain with sandwiches and a crowler of Dirt Farm beer.  Not a bad way to end the evening!  Up early the next morning and we hit a milestone in MichelVangelo: 20,000 MILES!  I honestly didn’t think the almost 30 year old vehicle would make it this far, but he keeps chugging along (albeit much slower than most vehicles).  For our last day in Shenandoah NP, we met Chris and friends to hike the infamous Old Rag Mountain loop trail.  An 8.6 mile hike with 2,400ft of elevation gain, and LOTS of rock scrambling.

This was the first time we have done a hike that requires climbing over/through/around giant boulders and I loved it!  The views from the top were amazing, even with a dense fog sitting over the valley and it was the perfect spot for a lunch break.

After the hike Chris and crew took us to Sharp Rock Winery, with quaint farm views and Front Royal Brewpub for some delicious beers and food.  Thank you again to Chris and everyone for your kindness, you made us fall in love with Virginia and we can’t wait to come back and see all of you! 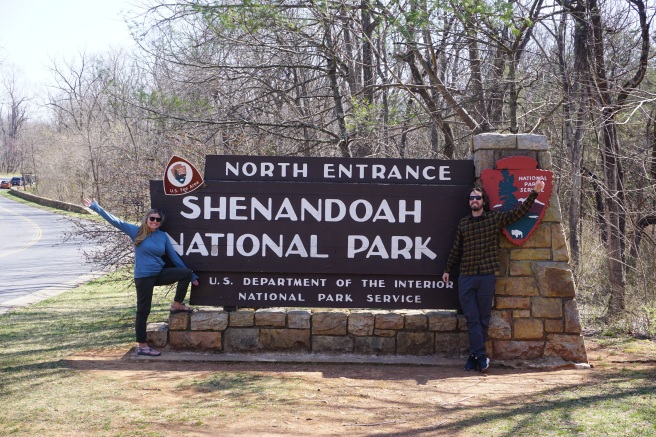 From Virginia, we drove MichelVangelo into Washington D.C. (cue my stress level skyrocketing).  Not our best idea to hit D.C. on a beautiful Sunday afternoon… but we squeezed our way down narrow streets to visit the National Arboretum.  Our favorite display was the bonsai exhibit.  It was amazing to see so many different bonsai trees and how long they have been living! 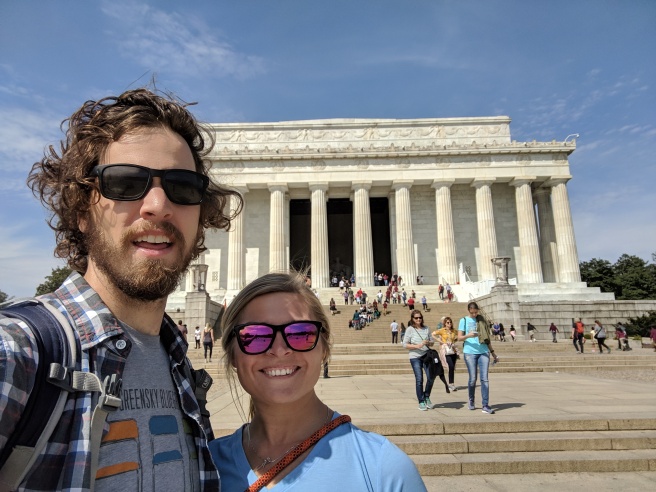 The one thing we could have done without: hundreds of carpenter bees swarming over our heads.  Luckily, they don’t sting but they are larger than bumble bees and you’re natural reaction is to duck!  We were able to find a campground just outside of D.C. in Maryland and, with the help of a very nice Metro worker, we survived the D.C. public transit system. 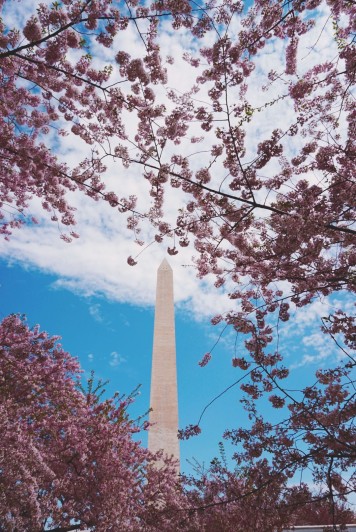 Cherry blossom season! Finally, we were able to be somewhere when things were in full bloom and it was beautiful!  Ten miles of walking all over D.C. to see all of the monuments, Smithsonian National Museum of Natural History, Smithsonian National Air and Space Museum, and a random bar for some much needed food and drinks.  Of all of the things we saw, the one that moved me the most was the Vietnam Veterans Memorial.  The simplicity of a wall of names makes such a powerful statement.  It seemed as though everyone around me felt it, respected it, and were changed by it (at least that’s my hope).

Delaware!  It is still strange how fast you can get from one state to another on the East Coast.  Jason found a free campsite within Redden State Forest (you just need to call to get a permit ahead of time).  The campsite it’s self was perfect, tucked away in the trees no one else around.  The porta-potty for campers was what nightmares are made of.  There have been many disgusting bathrooms on the trip, this one takes the cake (let’s hope nothing else tops this in the future).

Anyway, we happened to be only 15 minutes from Dogfish Head Brewery.  Great tour complete with safety glasses, crocs, and free samples!  Their beer is innovative and bold, a definite stop for craft beer fans.  Social media once again pulls through and we were able to meet up for dinner with Matt Niblock, an old high school friend, who happened to be working in Delaware.  Very fun to catch up and to unexpectedly see a familiar face on the road!

Next stop: New Jersey!  I will admit I was pretty excited to go to Atlantic City only because of Bruce Springsteen’s song “Atlantic City.”  Well, the song might romanticize that place just a bit, the boardwalk just seemed sad the day we were there.   At least we were able to stay in a hotel thanks to a gift card from Jason’s brother Eric and his wife Betsy!  After Atlantic City we looked for some New Jersey hiking trails and found Worthington State Forest.  At the trailheads were flyers entitled “The Snakes of New Jersey” (insert political joke) complete with over a dozen photos of various poisonous and non-poisonous snakes that you might encounter on the trails.  SUPER!  Well, the flyers were right, the most snakes we have seen on this almost year long trip were the two days in the New Jersey woods. 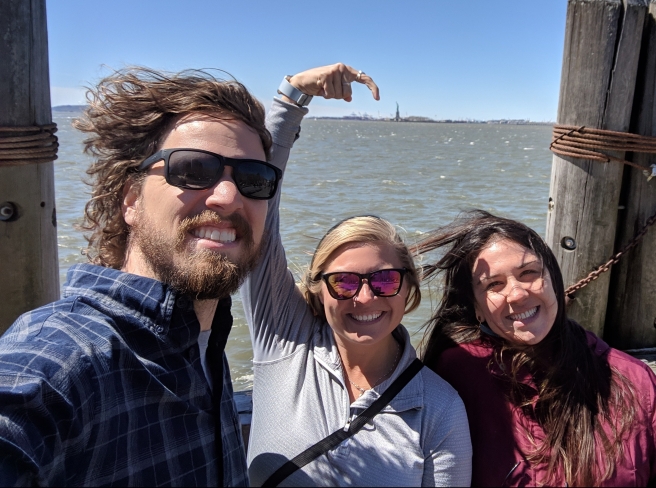 Our last stop in New Jersey was to see our friends Christy and Andrey!  Christy was our New York City tour guide for the day, thank goodness.  After a train ride and a few subway switches we made it to NYC.  Central Park was a slice of heaven in the craziness of the city, and The Strand bookstore is a reader’s dream! 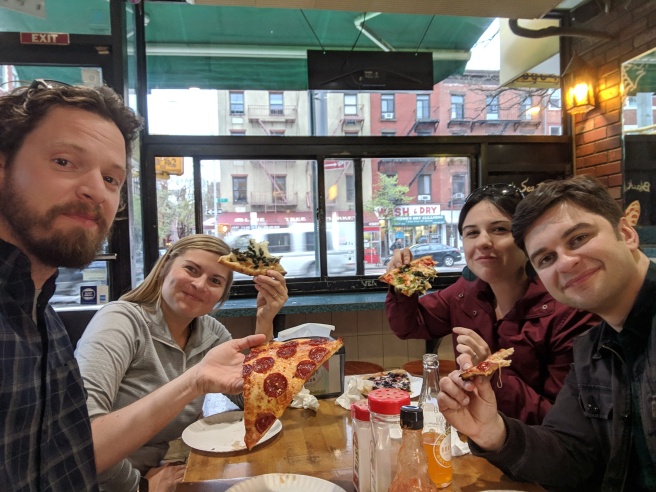 A quick look at all of the touristy things before meeting Andrey in his old undergrad stompin’ grounds.  The eclectic vibes of the neighborhoods along with a quaintness was an unexpected surprise in this big city.  Jason was very excited to end our NYC trip the only way possible, with a giant slice of NY pizza!  Thank you so much Christy and Andrey for showing us the ropes, letting us snuggle your cats, giving us a nice bed and a hot shower!

View all posts by kitty.parker